I rode with my cousins from Jerusalem to Tekoa, just south of the city to attend their granddaughter Be'eri's ballet recital. The annual event showcases youth dance ensembles in the settlement. Be'eri —Hebrew, for my well was our draw.

Post-recital at her home, a "caravan" — Hebrew, for trailer Be'eri changed into a sequined shirt in honor of my Tel Aviv street Calico.


Our family feasted on falafel with all the trimmings followed by blessings of thanks for the meal. 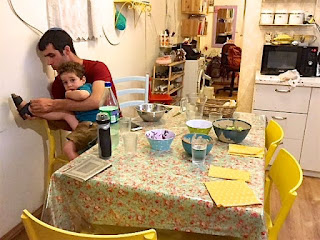 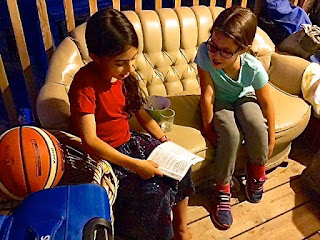 Close to nightfall, quick introductions to special neighbors — horses, several members of a cat colony, and sheep in the distance and a selfie of those whom the lens could capture. Hugs all around when my cousins and I left to return to Jerusalem from where I continued by bus to Tel Aviv. 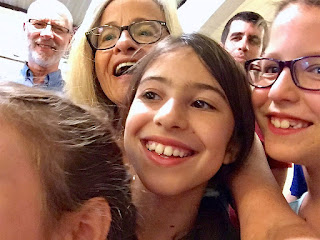 Tekoa is a Jewish settlement (population: 4500, in 2017) on the edge of the Judean desert. The international community considers Israeli settlements in the West Bank illegal under international law, but the Israeli government disputes this. Entering and leaving settlements requires passing through a checkpoint. While the location is off for me, think cognitive dissonance.
Posted by Tamar Orvell at 7:01 PM No comments: