Because I could not stop for Death... 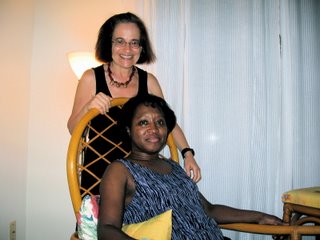 He kindly stopped for me...

My pal Sherry (in the photo, seated next to me) and her family buried her middle sister, Dyane, today. Death came unexpectedly last week to the fifty-year-old baby-faced vital mother of three. Twenty-year-old Jennifer woke up to find her mother cold and still, just past dawn, a day after undergoing elective surgery. Sherry's reality is changed forever as it is for Jennifer, her elder sister and younger brother, grandparents, father, host of aunts and uncle, cousins, and greater family and community.

In mind- and body-numbing grief, Sherry and her family cleaved to one another, and from their broken hearts and anguished souls, they rallied courageously in unity and with dignity.
So today, on a sunny cloudless July Thursday in Atlanta, Dyane's family and community celebrated her life, from its Sunrise (November 30, 1955) to Sunset (July 7, 2006). His Eye is on the Sparrow, and a medley of songs, prayers, personal remarks, and a eulogy hovered over the sea of mourners and loving supporters in Murray Brothers Cascade Chapel. She kept it real, never phony. She was my momma, the one and only, 13-year-old son Khadali penned in the program notes the ushers had offered.

An hour later, the half-mile-long cortege followed the white hearse, snaking along Cascade Avenue, a ten-minute drive to Greenwood Cemetery. Verdant lawns and giant-tree-filled yards of well-appointed homes flanked the route through this venerable African-American neighborhood. Not one car driving in the opposite direction on the heavily trafficked artery budged. Those drivers pulled to their right, pausing in the early afternoon crush to honor unnamed mourners accompanying their loved one on her last earthly journey. And for these precious moments, compassion ruled the road in a voluntary halt to the mad dash helter-skelter mania to push, to pull, to do, to redo, to undo.

And suddenly this local custom brought to me the sweetness of the Sabbath. On this day, in my Jewish tradition, we are instructed not to effect change in the world. Six days we do, and on the Sabbath, emulating the Creator who rested from the six days' work of creation, we pause, shifting to "be" mode. On the Sabbath and along that "opposite" lane of the funeral procession, we might, perhaps, grasp the "bigger picture," the eternal.

Inside Greenwood Cemetery, as we passed rolling hills of family- and community-designated areas, wending our way to where we would witness Dyane's interment, I noted the Memorial to the Six Million in the Jewish section. And my memory transported me to ceremonies I had attended on Holocaust Remembrance Day at Greenwood, elsewhere in the United States, and in Israel. In a bittersweet silent prayer, I gave thanks that here, among other safe harbors, we dwell together with our brothers and sisters of all faiths or none, of every shade of color or none, earthly status or none. Here, extremism and violence, twin invaders of peace and of hope that hammer daily everywhere, are vanquished.

Dearest Sherry, You said, "It's very hard to fathom that we are now four." And I honor the hurt and salute your honesty. May you find comfort in knowing that you, the firstborn, loved Dyane relentlessly even as you are sheltering her freshly orphaned children in the wings of your gentle steadfast caring.
Posted by Tamar Orvell at 5:27 AM

Heart wrenching. I'm sorry for your friend and her family and her sister's children. Oh that mysterious part of life we know as death...

thanks, stephanie, for your caring.