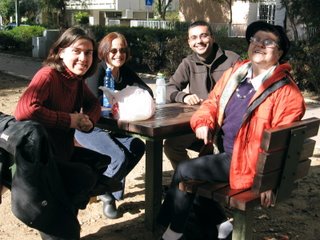 (left to right)
Elisheva, French-Canada born
me, Jerusalem born
Fabrice, Paris born
Sara, Bulgaria born
While Fabrice lives in Tel Aviv as I do, Elisheva and Sara live in Jaffa; Elisheva because it reminds her of Mexico where she lived many years, and Sara because her parents lived in this ancient port city when they "moved up" from a ma'abara, an Israeli transit camp during the 1950s.

In the photo, we are sitting on Ben Gurion Boulevard near the Gordon ulpan, a center for the intensive study of Hebrew. We are speaking Hebrew with a word or more of English or French tossed in to explain a term, an idea, or a book. The free-wheeling conversation started with Sami Michael's novel yonim b'trafalgar [Pigeons in Trafalgar] that we are studying now and then shifted to the teacher's political biases (all speculation, of course!) and ours, and from Ayn Rand (whom Sara had read as a teen living on a kibbutz), existentialism ("Why did the teacher lump Kafka with Sartre and Camus?"), communism and its [false] promises, Israel's police departments today and in earlier years, religion (flavors, traditions, distortions, impacts), and more.
Posted by Tamar Orvell at 2:36 PM

Thanks for your visit, Marcel. Great hearing from you. Wish I could reply in your native French! Eight years studying the language enables me to read only, and just a bit though enough to enjoy cruising your wonderful site.