In Tel Aviv: The orange on the Passover seder plate

Passover (or Pesach) is a sacred myth that celebrates the escape of the ancient Israelites from Egyptian bondage. Our original Independence Day, Passover marks the shift from a nation of slaves to a free people, from a collection of tribes to a nation of law. And the covenant between them and the one God. The festival offers rituals, lessons, and actions for any Jew whether a particularist or a universalist, and for anyone of any faith or none.

We are commanded (Exodus 13:8) to retell the liberation story to our children (of any age, including ourselves) yearly. We do this at the seder meal, a  ceremony featuring a seder plate containing symbolic foods, each with special significance in the festival narrative.

Though we follow the Haggadah ("the telling" — compiled between 280 CE and 360 CE), "It is praiseworthy to expand on the story of the Exodus from Egypt." For in our telling and listening we can internalize lessons, notice contemporary parallels, and find ways to repair broken parts in ourselves and our environments.

When is Passover?
In the Hebrew (or Jewish) calendar, Passover falls on Nissan 15 through 22. Nissan is the seventh month of the religious year and the first month of the civil year. In 2014, Passover starts Monday, April 14, at sundown, and continues through sundown, Monday, April 21 (outside Israel, through Tuesday, April 22).


Solidarity with marginalized people
in the Jewish community and beyond
The Haggadah begins with an introductory blessing, then we read, in Aramaic:


Who is hungry? Who is needy?

And, in the past decade, more than 60,000 hungry and needy refugees and asylum seekers have entered Israel seeking safe harbor from wars, conscription, violence, and dictators in their homelands. Most fled from Eritrea, Southern Sudan, Darfur, the Ivory Coast, the Democratic Republic of the Congo, and other African nations.

Passover Freedom Seder for Israelis and

African Refugees and Asylum Seekers
Since 2007, the Joint Freedom Seder has become an annual expression of collective remembering turned into action. This seder, which retells our story and stories of people still enslaved, oppressed, and suffering, has been held in Levinsky Park between south Tel Aviv's Neve Sha’anan neighborhood and the Central Bus Station, a seedy, rundown living area of mostly poor Israelis, African refugees, southeast Asian foreign workers, streetwalkers, and junkies.


A coalition of activist-volunteer-visionaries from a wide spectrum of synagogues, Zionist organizations, youth movements, and international humanitarian agencies organize and prepare the Joint Seder for hundreds of people, double the number initially anticipated.


In 2014, two Freedom Seders in Israel are planned
In Rabin Square in Tel Aviv, and outside the Negev southern desert Holot detention center for refugees and asylum seekers.

To those people who ask, How is a seder relevant to African refugees and asylum seekers?

I cite the biblical injunction:

Like the native among you shall be the sojourner who sojourns among you, and you shall love him as yourself, for you were sojourners in the land of Egypt.
Leviticus 19:34

At the 2010 Freedom Seder: 3 profiles in courage
Profile: Philmon, age 23, is an Eritrean psychology student seeking refuge from political and religious persecution. Until he can safely rejoin his parents and siblings in his homeland, Philmon does menial jobs that Israelis don’t want, for low pay without benefits. 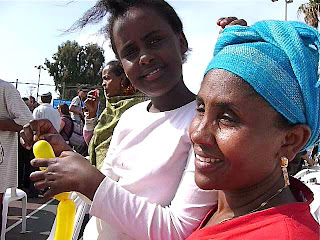 As did most African refugees, Saram's mother (shown with Saram in the photo) entered Israel through Egypt, from where the Israelites in the narrative escaped to freedom millennia ago. 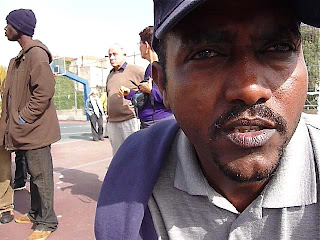 "We seek help from you, people
who understand our misery"
Profile: Johannes (shown in the photo) graduated from an Eritrean university with a degree in political administration. In our conversation, I sensed that he spared me details of the harsh life he has known since his government arrested him and fellow students protesting against the military regime. For more than a year, they were beaten, tortured, starved, and enslaved until Johannes escaped, as did many "fortunates" — as he calls surviving political prisoners.

We came to Israel, a place of miracles, and we seek help from you, people who understand our misery, he replied to my dumb question, Why come here? As I probed, with his permission, the narrative of his suffering touched on key points: longing for home, loneliness, unemployment, language barriers, fear. I came through the way that Moses and his people, your people crossed. Help us, please help us get out of this suffering, he pleaded.

Kabbalat Shabbat
The seder ended. The sunny spring afternoon turned to dusk. I forgot the oranges on the seder plates and the stories shared over the ritual meal. The loud music and singing were silenced. Yet instead of releasing the struggles and cares of the week at the weekly prayer service welcoming the Sabbath Bride, I was replaying Johannes' exodus story, and I couldn't stop listening to his plea screaming inside me.

I can see why you say you're haunted. I did volunteer work for several years with migrant workers and other African refugees -- it's such a complex and daunting issue.

thank you for making human and personal that which is so often overwhelming headlines...

While conversing with, listening to, and video-ing a dozen refugee-participants, I suddenly turned off my camera because I felt useless, helpless, ridiculous. I had thought that my joining them would be an uplifting experience for me; yet the opposite was true as I began to fathom a bit more their desperate plight. And I have continued processing the conversations.

Would it be possible for me to use your picture of the orange on the Seder plate for an article on Examiner.com/Portland and in material for our congregation, who will be celebrating LGBTQ history month and pride month with an orange on our communion table? I would give you (or another photographer if it is not your photo) full credit and reserve rights.

Thanks for your consideration. Hope to hear from you soon.
Cindy Bowman, M. Div., BCC

How totally classy of you to ask permission and to offer full credit and reserve rights. Ethics in cyberspace! You are most welcome to share this portrait that I did indeed capture last spring at a model Passover Seder with African refugees in a Tel Aviv park. The experience haunts me to this day. I will never forget the hope in the children's eyes, and the despair in so many adults' eyes. These two young girls at the table with the oranges spoke in Hebrew with me (our only common language). In the short time they had been in Israel, their language skills soared as did their happiness rise, partly, from escaping the devastation that they and their families had known so intimately in their native countries. Of course, it's a long road for them and any refugee fleeing war, corruption, and abuse to feeling fully free and at home. I wish you and your congregation much joy now and during pride month. Pile on those oranges;-) And, when you publish the article, I'd love to get the link.

Hey, Tamar! The article and picture are up. The link is to my main examiner page. From there you can click on the article.

Thanks for your permission. Many years ago, I worked in France for an organization called La CIMADE. Cimade works with immigrants and refugees and development projects throughout the world. I learned much about the plight of refugees and immigrants — whose situations seem to get more precarious over the years.

Blessings in your work and life,
Cindy

Of course I have experienced the life as refugee. Oh! its hard. But still I am alive and world ahead is wide open for me and red carpet of freedom where I am walking today.

I can feel the pain of others too fast.... and found Jewish people are faster and you are the living example. (Jewish Community In Atlanta) In the past I have seen a picture of a beautiful Jewish women with a little baby like my boy in her hand. Those days this children were allowed to play only in the graveyard areas by the enemies. How painful it is.

I know several thousand of people were killed in that land but don't give a wrong their spirit will always remain alive. Remember them always.

See how you got connected with people from highest mountain of the world Nepal and Bhutan. And you are helping us from there. You know we love you indeed a Jewish spirit.

Today thousand are coming to seek your help in Tel Aviv. Why? coz.... Its a Holy land. Central figure in the world history. I hope all the people in this world will help to keep this land as HOLYLAND and citizens always safe.

I will light a candle and pray for the sprit of happiness coming from your birthplace.

Thanks for sharing your wonderful story..I really enjoy reading it.

I enjoyed the piece, and am always so impressed that you are so adept at talking to people and getting their stories. It is a fabulous skill.

elmorgan, Readers, including the young man, are welcome to contact me by sending an email: micabear2 AT yahoo.com