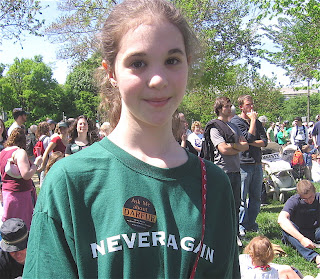 On Sunday, April 15, memorial services in some parts of the world marked Holocaust Martyrs' and Heros' Remembrance Day. Israel fell silent as a two-minute siren sounded across the country at 10 a.m. Each year on this day, the Nation is called to stop activity, stand, and remember the 6 million slaughtered Jews, among them 1.5 million children, and millions of other victims of Hitler's Final Solution. The siren follows memorials at the Knesset (parliament) and the Yad Vashem Holocaust Martyrs' and Heroes' Remembrance Authority.

What is the sound of a siren?
The media describes the siren sound as wailing. I disagree. A siren is a thing, not a human or living being. And on this day especially, we need to be very clear about the difference between things and humans and living beings. Today, we're addressing evil and responsibility, and while “Some are guilty; all are responsible” (Rabbi Abraham Joshua Heschel).

When I am in Israel listening to the siren — its sound strong, steady, and clear, I stand mute, wet-eyed, immersed in reflection, memory, resolve. And, if I am outside, I observe traffic stop — the drivers and passengers stepping out of cars, busses, taxis, and trucks, and pedestrians standing still. Some people, usually foreign workers and tourists, keep going. And I think, probably they have no idea why this siren is sounding, and why people have stopped moving and are standing silently. Sometimes ultra-Orthodox Jews keep going, too. They have their explanations.

The remembrance siren caught me driving [in Tel Aviv] on Gordon just before Dizengoff. My watch was wrong and I didn't know it was 10 a.m. I was taking Shusha to the kennel [to board during...] the conference, so when I opened the door to stand at attention she thought we had arrived somewhere and popped out. I didn't respond. She looked at me thinking I would direct her, warn her, but I was involved in tragedies, in thoughts. So she crossed the street and tried to look the lady standing at the gate in the eye. But the lady didn't look back. She crossed over again closer to Dizengoff, peering at first one and then another person standing at attention, clearly confused. A man at the door of his Mazda didn't notice that she jumped into his car and jumped out. It was a minute where she was the only thing moving on that busy street, and she bothered no one. But because I couldn't give my total attention to the awful history, and she was so curious and funny, it was the first time I didn't cry on Holocaust Day (Karen Alkalay-Gut Diary).


Observing this day in Atlanta with Sherry
We headed to the Breman Jewish Heritage Museum, in midtown, to the exhibit on “Creating Community: The Jews of Atlanta from 1845 to the Present” and a concert in memory of the Shoah victims.

Since Jacob Haas, the first Jew who lived in Atlanta, opened a dry goods business with Henry Levi in 1846, Atlanta's Jews have experienced both acceptance and discrimination. We inched our way along the displays and video booth showing Atlanta Jewish residents at prayer, home, work, and play, and building community while contributing to the city, state, and region. The artifacts and messages sparked memories; mine, of the Jewish experience and Sherry's of the African-American experience.

Facing down terrorism long before 9/11
Sherry, a child during the 1950s and 1960s in rural Atlanta, knows a thing or two of rejection and discrimination. The great-granddaughter of a slave, Sherry began public school in a segregated classroom. She was among the first students to integrate her local high school desegregated a decade after Brown v. Board of Education (1954), a landmark U.S. Supreme Court case in which the Court declared state laws establishing separate public schools for black and white students unconstitutional.

The night before she and sister Janice were to enter high school, a cross-burning on their yard and bomb threats by the Ku Klux Klan kept her father up till morning, a shotgun in his lap. Yet when the well-scrubbed neatly dressed sisters waited for the school bus, the driver passed them by, the white kids leaning out the windows screamed, Nigger! Hattie Pearl piled her daughters into the car and drove to school where the gentle, soft-spoken woman notified the principal, “I’ll take you to the U.S. Supreme Court if the driver doesn't stop for my children.” And, the next day and after, he did.

We are here!
The museum concert in memory of the Shoah victims featured the popular prayer-poem-song Eli, Eli by Hannah Senesh; the Hungarian-born paratrooper trained in Mandatory Palestine to rescue Jews was caught, tortured, and shot dead by a Nazi firing squad in Yugoslavia. Also featured were the Kaddish (mourner's prayer), the Hatikvah (Israeli national anthem), and the Yiddish Partisans Hymn, the unofficial song of Jewish partisans across occupied Europe, written in 1943.

Observing Holocaust Remembrance Day with you was a gift. I approached the event braced for heartbreak. But the Partisan’s Hymn buoyed and strengthened me. I felt as I have singing “We Shall over Overcome” at Martin Luther King celebrations. It was a sobering, educational, and rejuvenating experience. Thanks, Tamar.

Sherry - We have shared tons over the years, and always end up richer with each encounter. I emailed a thank you to Karen whose blog I quoted from on the two-minute silence she experienced in Tel Aviv with her dog Shusha running around. Here's her reply.

Tamar,
I'm honored. I checked out your site and I'd love to meet you and your friend Sherry some day!
Karen